Wait… you seriously shoot real film? Do you carry those vintage cameras around just for show?” 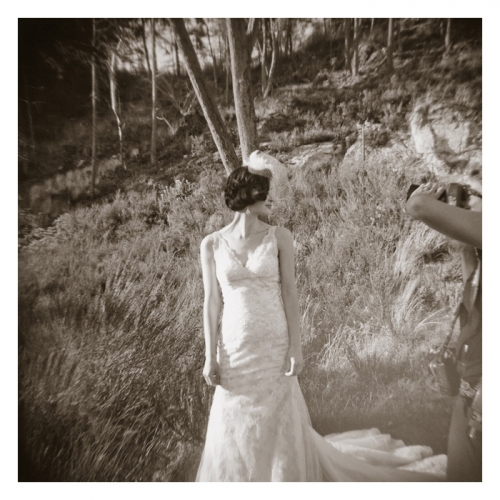 Yes seriously, I still shoot real film. Film is amazing. Like I said in my bio…it’s not that it’s “better” then digital it’s just a different tool. Within the film cameras we use there are different formats that convey different looks and have a different feel to them. The above picture here is one that Ben took on our Holga camera of me photographing the bride and as you can see I have three cameras on me. I always shoot with a 35mm camera (either my digital or my film body) and I always have at least one Contax 645 Medium format on me as well. Ben will rotate in and out different fun cameras like my holgas or the rollei or whatever other weird vintage camera we’re geeking out on at the moment.

“Does it make the photos look old or vintage? Do you only shoot black and white in those cameras?”

No, not necessarily. Certain film cameras will capture very crisp and clean. I had an older gentlemen pull me aside at a wedding recently during the reception. He said, “I’ve been watching you shoot all day with these different cameras…I was thinking to myself what is the difference in these cameras she’s shooting. So I watched and it’s like I can see your brain cranking and with absolute intention you knew which camera you were going to grab next for each shot.”

I just think some photos look great captured in black and white, some in color, some in medium format… some with different angle lenses… it provides a nice variety of work in the end to work with when you’re viewing the collection as a whole.

“How will I print my photos after the wedding if it’s shot on film?”

The film all goes to LA to get scanned by the lovely folks at Richard Photo Lab. When it comes back to me the scans are then touched up, final color corrections are made, the images are prepared as regular jpeg files and I add the final images to the flashdrive that is provided in my wedding package. From there my clients have no problems getting their own reprints made.

“What if something happens to your film? How do you back up your work? What if a camera fails during the wedding day?”

We have so many cameras that we work with that if one gets jammed up we pull another one out of the bag and no one would ever know it happened. We also work with multiple digital and film cameras so that we are constantly capturing on both formats. I shoot with two contax cameras and over the many years of doing this I have witnessed times when the camera jams up and won’t shoot. It can sometimes be a finicky camera and some photographers only shoot with one contax because they are very expensive cameras (the price has risen on them in the past couple years from becoming so popular in the wedding industry and they don’t make them anymore).

If you have any other questions about film or our gear please feel free to contact me! I’m an open book and will give a very true and honest answer!